This blog post will quickly get you off the ground and show you how Kafka Streams works. We’re going to make a toy application that takes incoming messages and upper-cases the text of those messages, effectively yelling at anyone who reads the message. This application is called the “Yelling Application”.

Before diving into the code let’s take a look at the processing topology you’ll assemble for this “yelling” application. We’ll build a processing graph topology, where each node in the graph has a particular function.

Figure 1 Graph or Topology of our Kafka Streams application, the ‘Yelling’ App 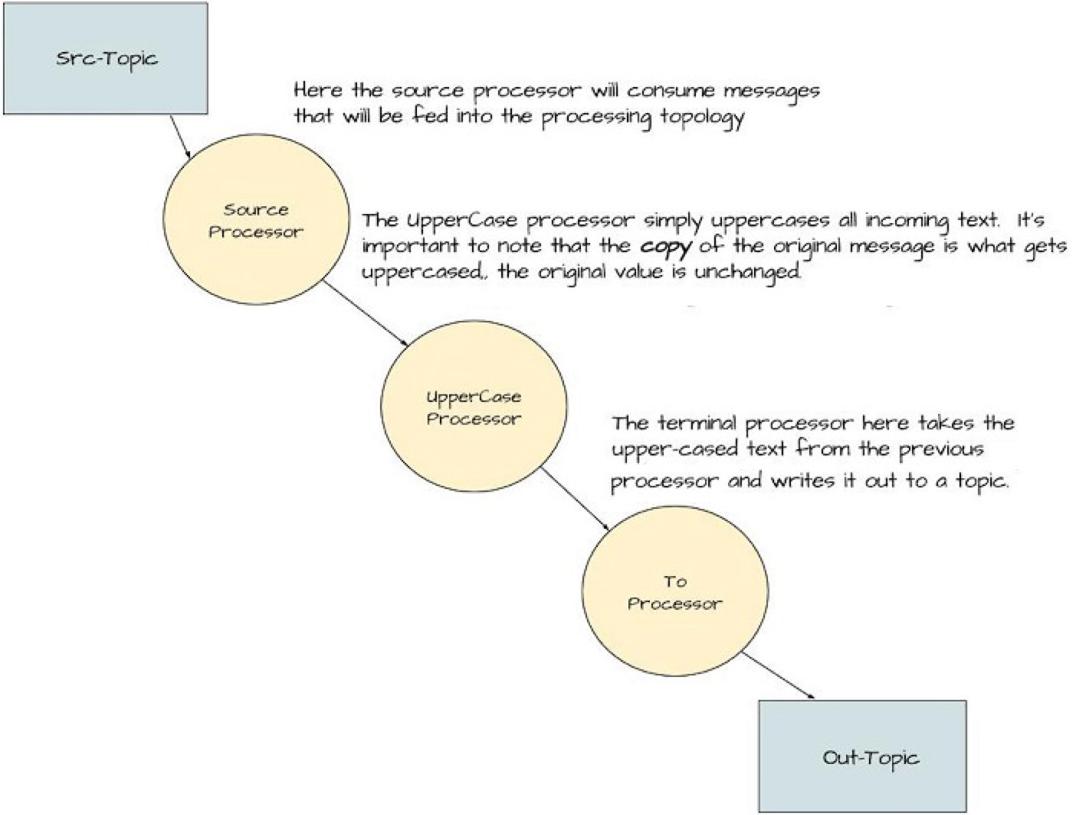 As you can see from the image, we’re building a simple processing graph. It’s simple enough to resemble a linked list of nodes more than the typical tree-like structure of a graph. But there’s enough here to give us strong clues as to what expect in the code. It requires a source node, a processor node that transforms incoming text to uppercase, and finally, a processor that writes results out to a topic. I’m going to show the whole application first; then I’ll walk through and explain each piece.

Here are the main points of the program above

This is a trivial example, but the code shown here is representative of what you’ll see in Kafka Streams programs. We will refer to this initial program points listed here throughout the blog.

With more advanced examples, the principal difference is the complexity of processor topology. With that in mind let’s take a walk through our first code sample presented here.

Although Kafka Streams is highly configurable, with several properties you can adjust for your specific needs; our first example uses two configuration settings. Both of these are required because there are no default values provided. Attempting to start a Kafka Streams program without these two properties defined results in throwing a ConfigException.

This line (from point number 3 of listing 1) is where you create the Serde instance required for serialization/deserialization of the key/value pair of every message, and store it in a variable for use later on. The Serde class provides default implementations for the following types:

Figure 2 Creating the Source Node of the ‘Yelling’ App With this line of code (from point number 5), you’re creating the source or parent node of the graph. The source node of a topology consumes records from a given topic or topics.

In this case, it’s aptly named “src-topic” and the KStream instance simpleFirstStream starts consuming messages written to this topic.

Figure 3 Adding the UpperCase Processor to the ‘Yelling’ App 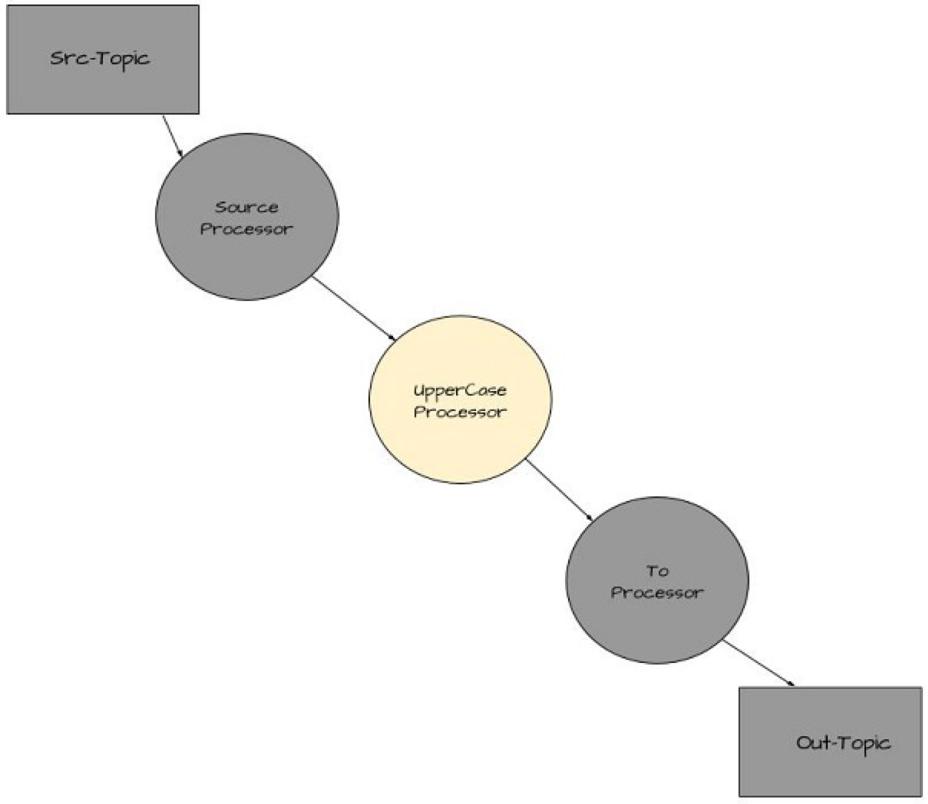 With this line (point number 6) you’re creating another KStream instance that’s a child node of the parent node. By calling the KStream.mapValues function you’re creating a new processing node whose inputs are the results of going through the mapValues call. It’s important to remember that mapValues doesn’t modify the original values.

The upperStream instance receives transformed copies of the initial value from the simpleFirstStream.mapValues call. In this case, it’s upper-case text. The mapValues method takes an instance of the ValueMapper<V, V1> interface.

You could’ve used the form of (s) -> s.toUpperCase(), but because toUpperCase is an instance method on the String class, we can use a method reference. Using lambda expressions versus concrete implementations is a pattern we’ll see over and over with the KStreams API. Most of the methods expect types that are single method interfaces, and you can easily use Java 8 lambdas. 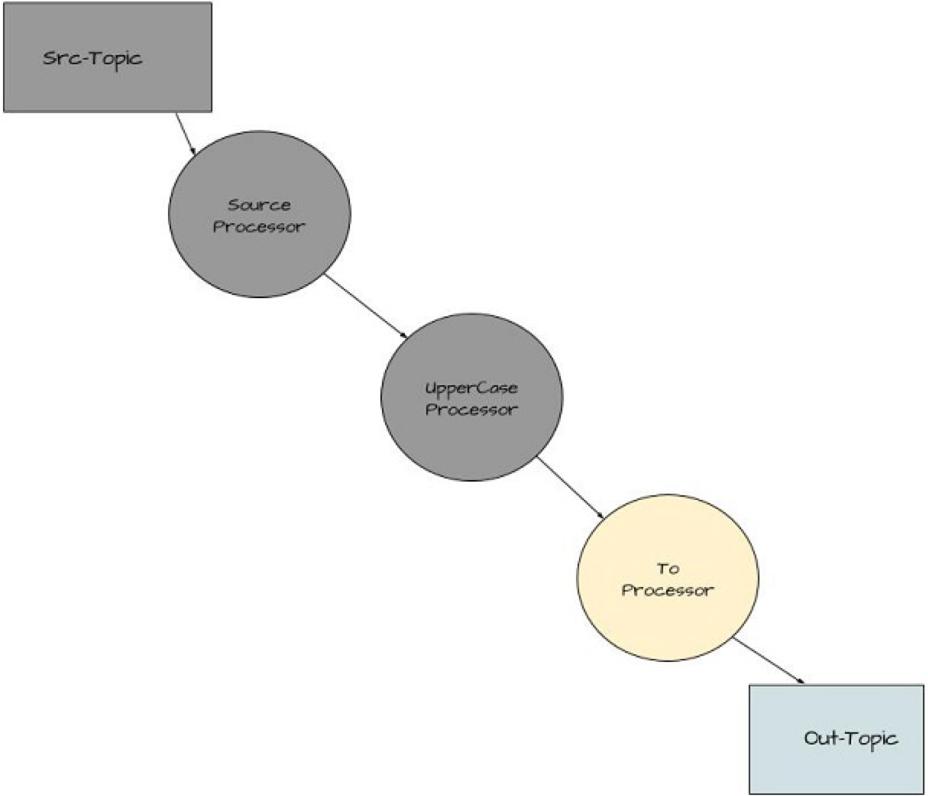 Here (point 7) we add the last processor in the graph. By calling the method, you’re creating a terminal node in the topology – Kstream.to to be more precise. You’re creating a sink node where the upperStream processor writes the key-value pairs to a topic named “out-topic”.

Any KStream method that has a return type of void is a terminal node and it ends stream processing at that point, but it may not necessarily be a sink node. Again we see the pattern of providing the required serde instances needed for serialization/deserialization when reading from or writing to a Kafka topic.

NOTE: One note about serde usage in Kafka Streams. Several overloaded methods are in the KStream API where you don’t need to specify the key/value serdes. In those cases, the application uses the serializer/deserializer specified in the configuration instead.

In our example above we used three lines (steps 5, 6, and 7 from listing 1) to build the topology.

Having each step on an individual line was used to demonstrate each stage of the building process clearly. All methods in the KStream API that don’t create terminal nodes return a new KStream instance. Returning a KStream object allows for using the “fluent interface” style of programming. To demonstrate this idea, here’s another way you could have constructed the yelling application topology:

We shortened our program from three lines to one without losing any clarity or purpose.

Aside from the general construction of a Kafka Streams application, a key takeaway here is to use lambda expressions whenever possible to make your programs more concise.

That’s all for this article. For more, download the free first chapter of Kafka Streams in Action and see this Slideshare presentation.